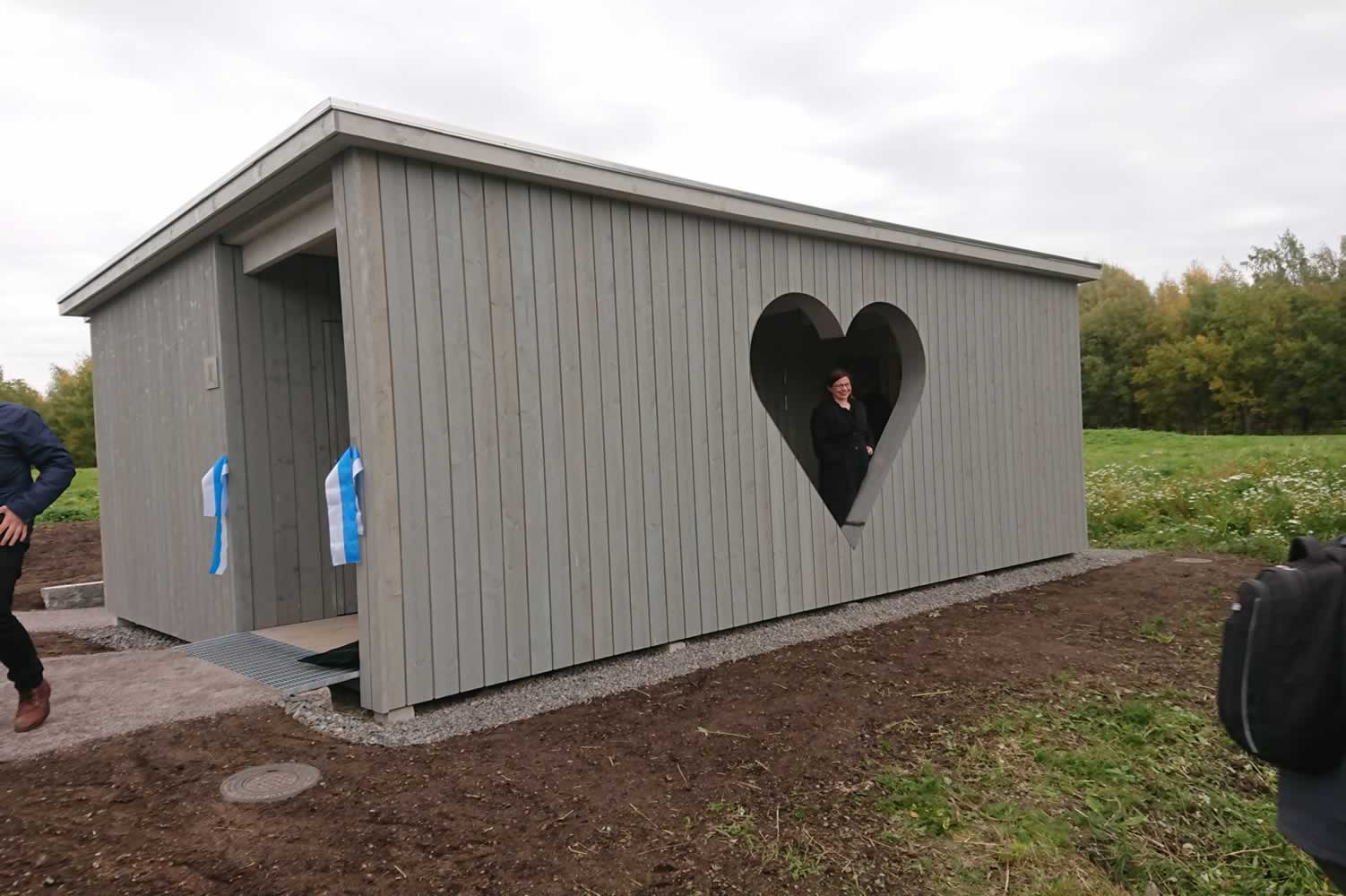 A few weeks a go, on the 30th of September, we celebrated the opening of the first Helsinki-Outhouse at Pornaistenniemi, which is some 3 km from the city center. We were honored to be at the grand opening, where the vice Mayor of Helsinki, Ms. Anni Sinnemäki cut the ribbon and gave a speech praising the new ecological service for the outdoor lovers.

But what is Helsinki-Outhouse? How does it work and what does it look like? In this blog post we will tell exactly how everything turned out in the real life.

Helsinki-Outhouse is a public toilet that works off-grid without connection to sewage or water. The operation is based on composting dry toilets, the Green Toilet -system. Helsinki city initiated a project a few years ago to design an outhouse model that could be placed to lively places in the city to serve people spending their time outdoors. The goal was to develop a nice, modern, easily recognizable design of the outhouse, their own Helsinki-Outhouse. Finally, in September the first outhouse saw daylight and was inaugurated in front of many interested citizens.

The toilet waste from this outhouse does not end up in the sewer. It is pre-composted in the Green Toilets on site and periodically moved to the Helsinki city composting site to be treated for the end use as fertilizer in the city gardens. The first Helsinki-Outhouse was placed to a park where there is a lot of people spending their free time: fishermen, bird watchers, joggers etc. It is estimated that the outhouse will have hundreds of users daily, so this will be a good test site when planning the next Helsinki-Outhouses. 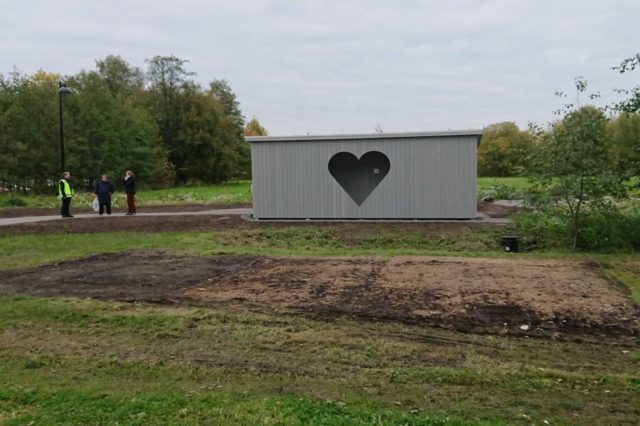 This Helsinki-Outhouse represents the new era of outhouses, where ecological operation is combined with modern design. This new design has already been nominated as the most beautiful outhouse in the world. When the design project started, one of the goals was to create a unique look that people would recognize easily when there is a need to visit the toilet. Secondly, the sympathetic look of the outhouse will draw positive attention instead of vandalism. The third goal for the designers was to pay a lot of attention to the service side: enough space and good working conditions for those maintaining the toilet.

In the first Helsinki-Outhouse there are two toilet compartments, one urinal section for men and a small space for supplies. All areas are wheelchair accessible. 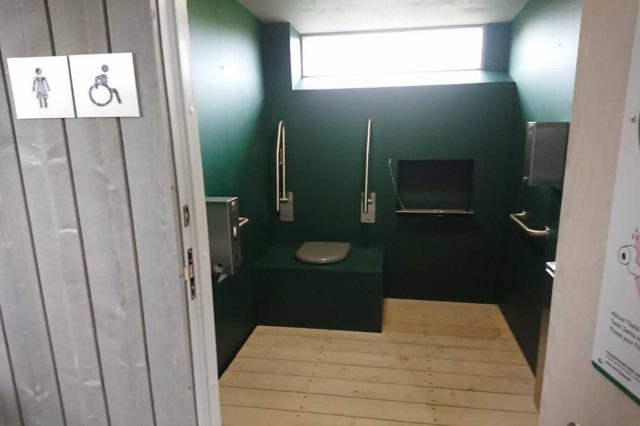 Inside Helsinki-Outhouse the style is natural and modern. The traditional wooden bench is now dark green matching to the walls. Wide, natural floor planks give Scandinavian touch to the design. Wide windows on the back wall give a lot of natural light in to the toilet. 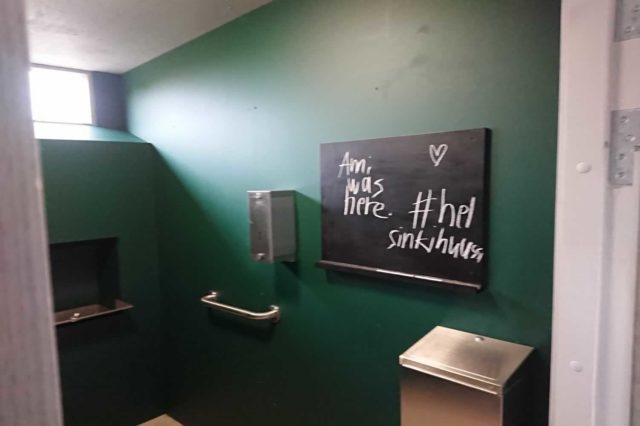 A cool detail is the chalkboard on the wall. There you can leave your important message to the next user! Hopefully, this opportunity will cut down the habit of drawing to the walls of a public toilet. 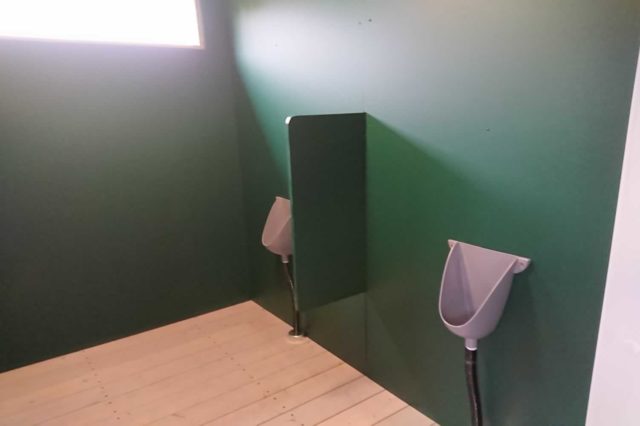 In the urinal section is equipped with Pikkuvihrea´s waterless urinals. During busy summer days the urinals will take of the load off from the toilets and speed up the use when there is a lot of people around. 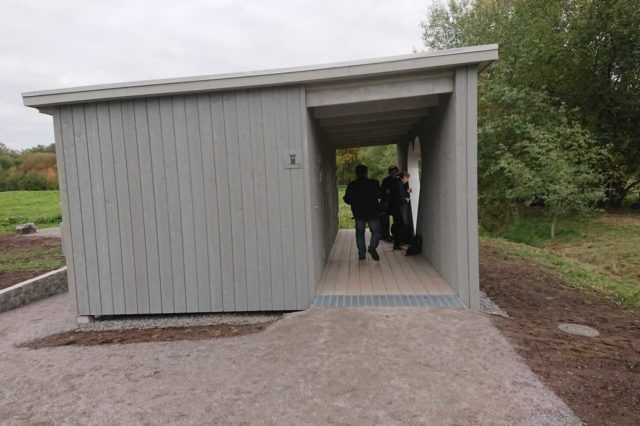 As a user of Helsinki-Outhouse, there is not much you would need to know before the visit. Just walk or roll in and choose a free toilet to use!

Inside there is a normal looking toilet seat. Just open the lid and you will already notice that there is no bad odor in the toilet. You can proceed just like in a normal water closet – only without the flushing. Also the toilet paper is thrown into the compost, but other litter should be put into the garbage bin beside the toilet. When you are ready, you can cover your waste with the dry material provided by the toilet seat. Easy, isn´t it?

For handwashing there is hand sanitizer available on the wall. To ease any doubts the users may have, there are also universal instructions on the wall with informative pictures.

As we have stated before in our blogs, simplicity in a public dry toilet is of great importance. We can expect that the users of this Helsinki-Outhouse will be a wide variety of people: children, elderly people, tourists from other cultures etc.  – all should be able to use the toilet without problems or breaking anything by mistake. 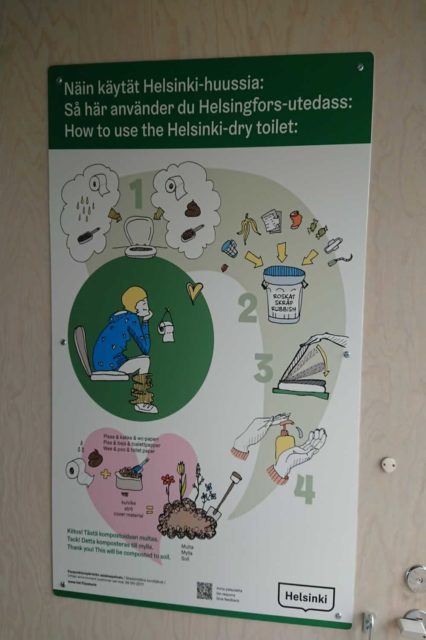 The operation of Helsinki-Outhouse is based on Green Toilet 330 composting dry toilet. They are placed on the seat and all the waste drops into the composting container below. Green Toilet automatically separates the excess liquid from the solid waste with the help of a special double base. This enables the composting process to start already when the toilet is in use. The leachate that is not evaporated or absorbed to the compost and the urine from the urinals is collected to a tank below ground.

There is a sturdy handle and wheels in the Green Toilet container. Thus, all the service can be done manually without the help of heavy machinery. 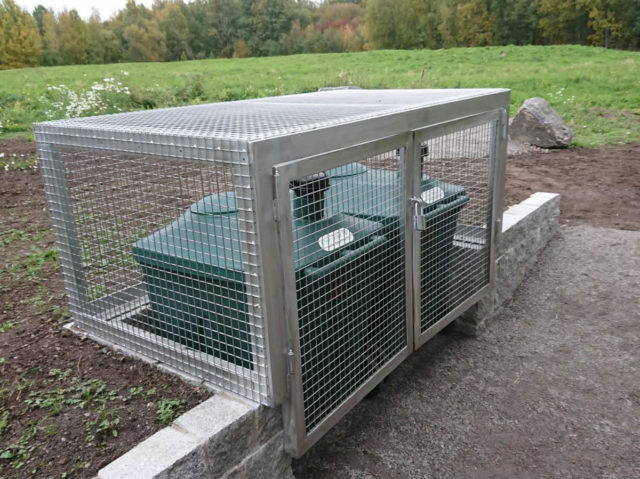 When the Green Toilet in use becomes full, it will be pulled out and replaced with an empty container. The full container is covered with a closed lid and left outside to decompose. In the case Helsinki-Outhouse, the pre-composting will be done on site and final treatment in the nearby city composting center.

Where can you see Helsinki dry toilet live?

The process of establishing new Helsinki-Outhouses is well underway. Next ones are planned to Uutela and Vasikkasaari-Island, both recreational areas of Helsinki. meanwhile you can visit the first one in Pornaistenniemi. Here is the link of the exact location: 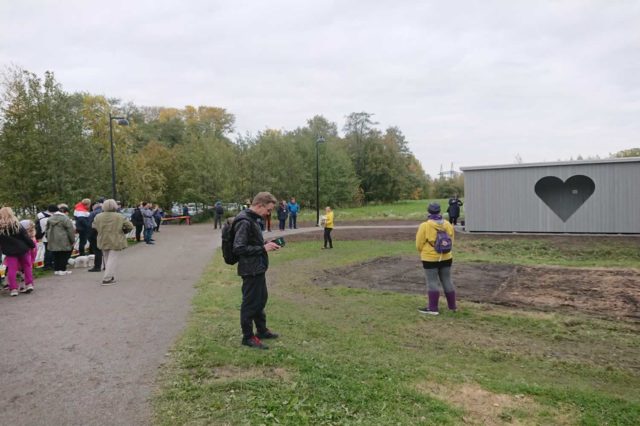 This first Helsinki-Outhouse is a great pride for us – of course! The whole process of planning was thorough and many experts of were involved on the way. Now that we can see the outcome, we are sure that many will be surprised that how nice and odorless an public outhouse can be. It is a shame that we can not transmit smell – or in this case the lack of it – via internet.

So, if you have a chance to visit Helsinki and Pornaistenniemi someday, maybe Helsinki-Outhouse can be on your list as well! There is lot to see in the area: bird watching tower, a rapid with fishermen, nature trail, food carts and the Museum of Technology (https://tekniikanmuseo.fi/in-english/) to mention some of the activities.

If you are interested in the topic and want to find out more – do not hesitate to ask! We here at Pikkuvihreä have executed numerous public outhouse projects in and outside Finland and want to promote this ecological choice to spread to serve people everywhere.